Celebrate the band’s discography with these awesome vinyl sets and Phunnys!

Since 2002, worldwide modern rock artists My Chemical Romance have been selling out shows and festivals. With their current worldwide tour, Kidrobot and My Chemical Romance have partnered together to bring fans the My Chemical Romance Limited Edition Vinyl Figure Series as well as a series of 5″ plushes. This series celebrates each studio album from MCR’s discography, including “I Brought You My Bullets, You Brought Me Your Love,” “Three Cheers For Sweet Revenge,” “The Black Parade,” “Danger Days: The True Lives of the Fabulous Killjoys,” and a special themed “The Return of MCR.” Each set is limited to only 2,000 pieces.

From their first album “I Brought You My Bullets, You Brought Me You Love,” this Phunny plush of the strait-jacketed escape artist from the album cover is 5 inches tall. It has a weighted bottom so you can stand it upright, and a clip so you can hang it upside down. 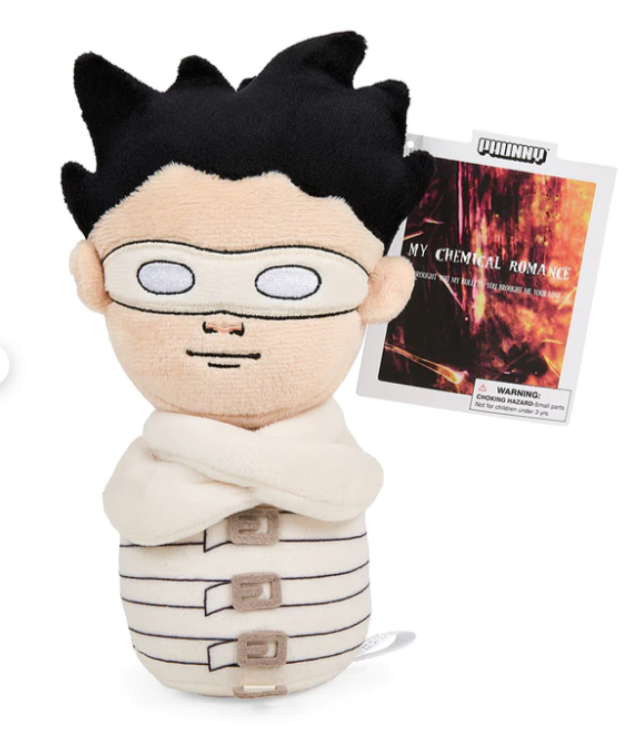 The following weekly releases are “Three Cheers For Sweet Revenge,” “The Black Parade,” “Danger Days: The True Lives of the Fabulous Killjoys,” and “The Return of MCR.”

The first set of the My Chemical Romance Limited Edition Vinyl Figure Series is available to ship now. Each set is limited to 2,000 pieces and costs $75 plus shipping and handling. Each My Chemical Romance Phunny is $15.99 with new Phunnys releasing weekly.

Grab your vinyl figure set and plush and share it with the #MCR community!

Get the My Chemical Romance Limited Edition Vinyl Figure Series and Plushes here!

About My Chemical Romance

Formed in Newark, NJ, My Chemical Romance made its debut in 2002 with the independently released album I Brought You My Bullets, You Brought Me Your Love. The band signed to Reprise Records the following year and made its major label debut with 2004’s Three Cheers for Sweet Revenge, now 3x certified Platinum. The album contained the Platinum hit “I’m Not Okay (I Promise),” and the Gold-certified “Helena.” Rolling Stone hailed the 3x Platinum The Black Parade as one of the top albums of 2006. Lead single “Welcome to the Black Parade” topped both Billboard’s Alternative Songs tally and the UK Official Singles. Danger Days: The True Lives of the Fabulous Killjoys was released in 2010 and topped Billboard’s Alternative Albums and Top Rock Albums charts. It was followed by a series of singles later released as Conventional Weapons in 2013. My Chemical Romance’s songs continue to rack up over half a billion cumulative global streams each year. The band’s top three music videos have amassed more than 100 million views each on VEVO. The band is Gerard Way, Ray Toro, Frank Iero and Mikey Way.

Kidrobot is acknowledged worldwide as the premier creator and dealer of limited-edition art toys, signature apparel and lifestyle accessories. Kidrobot is a collective of dreamers who want to create a space where art, design and surprise meet. The element of surprise – the nod, the magic – finds its way into everything Kidrobot does, creating a point of differentiation. Kidrobot is an innovative cross between sculpture and conceptual art, offering not only a powerful medium for today’s international fashion designers, illustrators and artists, but also the creative canvas for emerging street trends and pop art. Kidrobot figures retail anywhere from $5 to $25,000, and many appreciate in value over time.