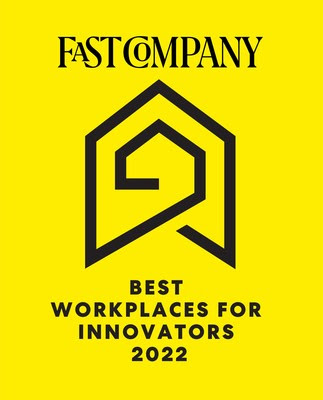 Developed in collaboration with Accenture, the 2022 Best Workplaces for Innovators ranks winners from a variety of industries, including computer science, biotech, consumer packaged goods, non-profit, education, financial services, cybersecurity, engineering, diversity, sustainability, B2B, and consumer products and services. Fast Company editors and Accenture researchers worked together to score nearly 1,500 applications, and a panel of eight eminent judges reviewed and endorsed the top 100 companies. The 2022 awards feature workplaces from around the world.

“For close to 30 years, Spin Master has built a reputation rooted in innovation, pushing the boundaries of creativity,” said Max Rangel, Spin Master’s Global President and CEO. “We are so proud to be recognized by Fast Company as a ‘Best Workplace for Innovators’. Collectively we nurture a culture where innovation drives growth and we remain committed to bringing magical experiences to kids and families around the world.”

Fuelled by a drive for continuous innovation, Spin Master delivers new ideas, concepts and experiences that reimagine everyday play across its three creative centres: Toys, Entertainment and Digital Games. With the belief that a good idea came come from anywhere, Spin Master’s dedicated teams scour the globe in search of innovation. This includes an internal advanced concepts team of inventors, designers and engineers, as well as a powerful, global network of external inventors.

“At the heart of our success is our incredible talent from around the world who push the boundaries of creativity,” said Tara Deakin, Spin Master’s Executive Vice President and Chief People Office. “In our ever-growing sandbox, we are focused on fostering an inclusive workplace where everyone can thrive, grow and ultimately have fun.”

While nurturing a culture of innovation internally, Spin Master is also dedicated to furthering the children’s entertainment industry at large. In 2021, the company introduced it’s Future of Play Scholarship program, supporting the education and career advancement of individuals from underrepresented communities with the goal to improve diverse representation within the industry. That same year, the company launched Spin Master Ventures, an initiative focused on accelerating growth in each of it’s three creative centres, through strategic minority investments in emerging technologies, pioneering services and other game-changing ideas.

“This year’s list of the Best Workplaces for Innovators recognizes organizations that have demonstrated a deep commitment to cultivating creativity across the board,” says Brendan Vaughan, editor-in-chief of Fast Company. “In the face of powerful headwinds, these leaders and teams continue to spur innovation.

Fast Company‘s “Best Workplaces for Innovators” issue is available online now, and the print issue will be on newsstands beginning August 16, 2022.

Jimmy Hart Shares Which WWE Star He Would Like To Manage

By admin
5 mins ago

Action Figure Insider » DISNEY+, HULU, AND ESPN+ OFFER THE BEST IN STREAMING INSIDE THE DISNEY BUNDLE PAVILION AT D23 EXPO