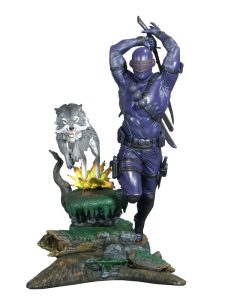 Depicting the silent warrior in his cartoon colors, sword raised as he and his pet wolf Timber race across a battlefield, this Gallery Diorama stands approximately 10 inches tall. It comes packaged in a full-color window box and is made of high-quality PVC. Now you know, and knowing is half the battle! Yoooo Joe!