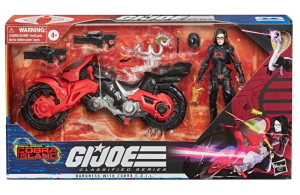 Hasbro’s popular G.I. Joe Classified Series Special Missions Cobra Island Baroness with C.O.I.L. 6″ Figure and Vehicle set, which is in-stock on Entertainment Earth for $39.99. The set is essential for your collection, and you can grab it by clicking HERE!

This Baroness figure comes ready for action, with multiple points of articulation for high poseability and character-inspired accessories. And with custom artwork by Craig Drake, the G.I. Joe Classified Series Special Missions: Cobra Island Baroness package will make a mark on shelves. The spoiled offspring of wealthy European aristocrats, the Baroness was a student radical who began her destructive activities at universities then moved to the international arena. She eventually found her way into the Cobra organization and became a close associate of Destro and a trusted lieutenant to Cobra Commander. Her relationship with Destro calls into question her true loyalties to the commander, since she allies herself with the strongest individual in an organization and will change her allegiances when necessary to keep herself in a position of power. 6-inch scale action figure with motorcycle includes two pistols, two blasters, snake, and additional accessories. Ages 4 and up.