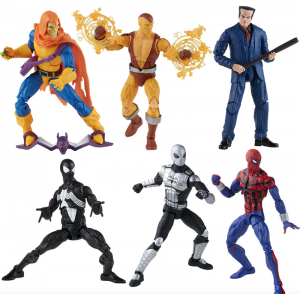 Hasbro released solicitations and pre-orders of their upcoming Hasbro Spider-Man Retro Marvel Legends 6″ Figures Wave 2 are available now. These figures pay homage to the 1994 Spider-Man The Animated Series, on retro Toy Biz packaging. This wave is expected to ship in January 2022.

A tribute to the history of Marvel Super Heroes, the Marvel Retro 6-inch Collection features core Marvel characters with retro packaging and design. Each figure includes multiple points of articulation, classic-inspired details, and character-specific accessories. Collectors and kids alike can expand their Marvel collection with 6-inch scale figures from the Marvel Retro Collection!