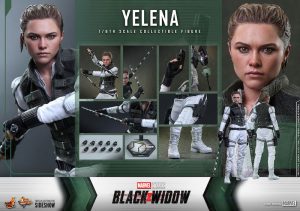 Hot Toys announced and released solicitations of their upcoming Black Widow Movie – Yelena Sixth Scale Figure, which is based on the new film. Yelena is priced at $270 and expected to ship between October – December 2022. You can pre-order her at Sideshow Collectibles by clicking HERE!

“I’ve never had control over my own life before, and now I do. I want to do things.” – Yelena

Making her official debut in Marvel Studios’ Black Widow, Yelena Belova has quickly gained attention from fans with her remarkable acrobatic skills and endearing humor. She is a product of the Red Room’s ruthless training program as well as a fiery assassin who has a secret history with the Black Widow that she is determined to address.

Long-awaited by fans, Sideshow and Hot Toys are thrilled to present Natasha’s sister from the Red Room – the Yelena Sixth Scale Collectible Figure, and of course her beloved vest with lots of pockets.

Masterfully crafted based on the screen appearance of Florence Pugh as Yelena in Black Widow, the figure features a newly developed head and hair sculpture with remarkable likeness, finely tailored snowsuit and the iconic vest, an array of highly-detailed weapons and accessories including a long baton, a pair of standard batons and a pair of articulated batons, pistol, daggers, headset, interchangeable hands for poses, and a figure stand.