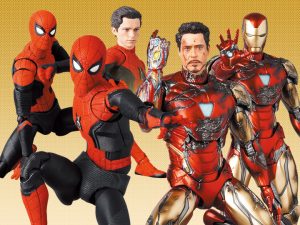 If you preorder anything at $39+ on Entertainment Earth, make sure to use coupon code: FALLFREE22 for FREE USA shipping. For in-stock orders, use code: ToyHypeUS for 10% off plus FREE USA Shipping  on orders of $39+

Spider-Man joins the MAFEX line once again, this time in his upgraded suit from Spider-Man: No Way Home. Spider-Man stands about 6 inches tall and features newly designed joints for maximum posing options. He includes several interchangeable accessories, including several pieces of webbing.

Based on his appearance from the Avengers: Endgame movie, Iron Man makes his return to the MAFEX figure line! He wears his Mark 85 suit that features a battle damaged look and includes several movie-accurate accessories.

Backstage Update on Elias Returning to the WWE Storylines