It looks like Brock Lesnar, DX and The American Badass may be appearing at the WWE RAW 30th Anniversary special.

We noted before how WWE Hall of Famer The Undertaker was announced for the RAW 30th Anniversary show next Monday in Philadelphia. WWE Hall of Famer & Senior Vice President of Talent Development Creative Shawn Michaels was also announced, along with several others.

In an update, WWEDVD.co.uk has announced the RAW 30th Anniversary DVD for pre-orders, to be released for fans in the UK at a later date.

It was reported earlier this week how Flair said Hogan will be at RAW 30. While not officially announced by WWE, this new DVD cover art also indicates that The Hulkster will be there. Lesnar and Triple H also have not been confirmed by WWE.

Regarding Lesnar, this could be confirmation that he is returning to the WWE storylines in time for the Men’s Royal Rumble match.

The Hall of Famers and Superstars WWE has officially announced as of this writing include Taker, Flair, Michaels, The Bella Twins, Ron Simmons, Sean “X-Pac” Waltman, Teddy Long, Jerry Lawler, Kurt Angle, and Senior Vice President of Live Events “Road Dogg” Brian James. Ronda Rousey is also advertised to appear. Tatanka recently confirmed that he will not be there due to family commitments, despite WWE inviting him, while WWE Hall of Famer Kane and others are expected. Samu and WWE Hall of Famer Rikishi have confirmed that they will be there for Reigns’ Acknowledgement Ceremony.

The RAW 30 special will take place next Monday from the Wells Fargo Center in Philadelphia, PA. Below is the current announced card, along with the RAW 30 DVD cover art:

* Every generation of The Bloodline (The Anoa’i Family) acknowledges Undisputed WWE Universal Champion Roman Reigns in an Acknowledgement Ceremony. Samu and WWE Hall of Famer Rikishi are among the confirmed names 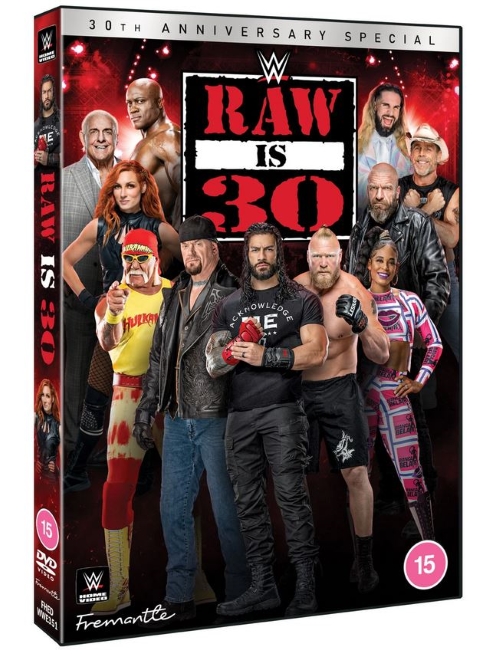 Stay tuned to WrestlingHeadlines.com for more.

Follow Marc on Twitter at @this_is_marc. Send any news, tips or corrections to us by clicking here.