Premium Collectibles Studio released solicitations and pre-orders of their upcoming Teenage Mutant Ninja Turtles Raphael Statue. There are two versions, a Deluxe Edition that includes a swap-out portrait with a red bandana cap and alternate eyes, a swap-out left hand holding a skewered Mouser on the end of his blade, which is priced at $1,205. The Standard Edition does not include these bonus accessories, and also is priced at $1,205. Both editions are expected to ship in May 2023 – July 2023. Pre-Orders are available on Sideshow Collectibles, and you can gran the Deluxe Edition now by clicking HERE!, or the Standard Edition by clicking HERE! 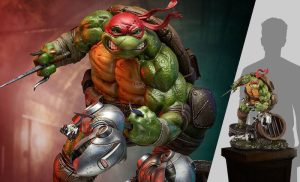 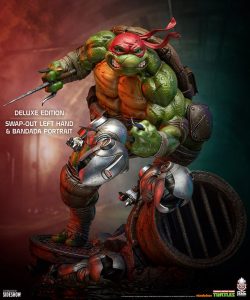 Sideshow and Premium Collectibles Studio present the Raphael 1:3 Scale Statue, a cool new Teenage Mutant Ninja Turtles collectible statue ready to join the fight. Raphael is the first in the TMNT Legends 1:3 Scale Statue collection, an original series of designs inspired by the many iconic appearances of the Ninja Turtles over the last 35 years.

The Raphael Statue measures 21” tall and 21” wide as the rough-and-tumble turtle takes a battle stance on a sewer pipe base. Defeated Mouser robots lay in the muck beneath his feet while he holds his two sai in anticipation of more mechanical mayhem.

The Raphael Statue is fully sculpted to capture a blend of realism and classic comic book style, with detailed textures and painting to bring the butt-kicking turtle to life in three dimensions. Raph’s portrait and shell feature battle scars from his time training under Master Splinter and alongside brothers Leonardo, Donatello, and Michelangelo. He wears brown wraps on his arms and feet, elbow and knee pads for protection, and a utility belt around his midsection. His snarling face is highlighted with his signature red bandana and white eyes, reminiscent of his early comic appearances.

The Raphael 1:3 Scale Statue – Deluxe Edition includes a swap-out portrait with a full red bandana cap with alternate eyes. He also comes with a swap-out left hand holding a skewered Mouser on the end of his blade. Change up this battling brother’s signature style with these exclusive added display options.