A company called Mighty Maxx is offering limited edition Teenage Mutant Ninja Turtles collectibles that may be of interest to you, including Raphael Pizza Bomber and Michelangelo Food Fight, which are made of vinyl. Each figure holds a pizza box and is non-articulated. Each is priced at $199.99, and you can grab both at BigBadToyStore now by clicking HERE!

Each figurine stands at 8.3″, and designed from artwork by Kevin Eastman and Peter Laird. 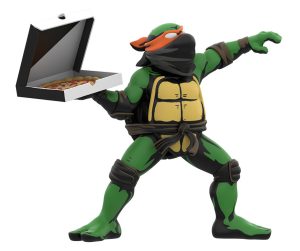 Your favorite Teenage Mutant Ninja Turtle has returned with more pizza to yeet! This time, Michelangelo is in his classic turtle colors while his pizza box receives a black-and-white stencil-like treatment, Ndikol style!

With his boxful of pepperoni-y pizza ready for a lean, green, and mean toss, you know you want to be on his side of the food fight! 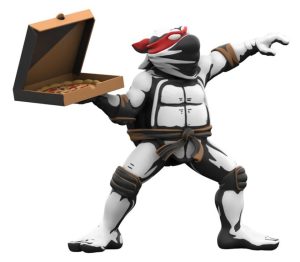 You’ll want to get out of the way of the Teenage Mutant Ninja Turtles Pizza Bomber by Ndikol, unless you want a faceful of New York-style pizza. Which doesn’t sound too bad.

Styled after the Teenage Mutant Ninja Turtles: Black & White Classics by Kevin Eastman and Peter Laird, this awesome figure features detailed comic-style paintwork on Raphael. Contrasting black and white details with a boxful of yummy, cheesy, pepperoni-y pizza, you know you want to be on his side of the food fight!

Sarah Schreiber on Keeping Her Name In WWE, Working with Kevin Owens, More

Next Article:
1 week ago
min read
0 %
Social connect:
or